SKF NOTE: Reading again my memories, written in 1982, of one night at New York City’s West End Cafe watching Sonny Greer and Papa Jo Jones trading fours with wire brushes. I’m thinking about a phone conversation with Chip Stern about the great musicians we had had interviewed and/or seen performing live. Chip said we were “blessed” to be alive at this time, and he’s absolutely right. 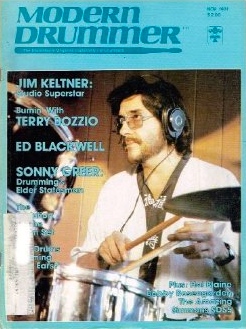 My feature interview with Sonny Greer was published in the November 1981 Modern Drummer. To my knowledge, Sonny is the only drummer MD paid for an interview. I will save that story for another post.

This post is three versions of the MD obituary I wrote for Sonny Greer. I took the liberty of rewriting the published version of this obituary where I thought I could do a better job of making my original points.

I am also posting here yellowed copies of my original MD manuscript. Typed using a manual typewriter! MD founder Ron Spagnardi wrote the handwritten “NICE!! R” in the upper left corner of page one. The other edits are mine.

Finally, I am including a copy of Sonny Greer’s obituary as it appeared in Modern Drummer. The photo shows Sonny and the drumset he was playing at the West End Cafe.

Drive uptown on Broadway in Manhattan on a Monday night. The streets are all lit up in yellow, and there are New York University students milling about. Park your car and walk cross the street to the West End Cafe. When you get inside, you feel like you’re in the wrong place. This is supposed to be a jazz club, but to your left is a cafeteria counter. To your right is a circular bar. Walk across a hardwood floor between the counter and bar, head towards two pinball machines and a cigarette machine, and make a quick left into the jazz room.

All of a sudden the cafeteria noise is filtered out while your eyes adjust to the darkness. There are rows of booths on either side of this room and tables scattered in the middle. At the far end of the room is a bandstand with a baby grand piano and the gaudiest drumset ever. It’s just a bass drum, a snare, and a floor tom, covered in small square mirrors — like a globe hanging from the center of a dancehall ceiling, bouncing light around the room.

A small, fragile looking old man climbs onstage with the piano player, sits down behind the set, picks up a pair of brushes and begins to play. You’re watching history. This man has been playing jazz from the beginning. His wire brushes wisp across a well-worn snare head, moving to the large floor tom, or dusting one of two large cymbals.

This is Sonny Greer. I judge a musicial performance good if it moves me emotionally. Sonny makes me smile. I lean forward, elbow on my knees, chin cupped in my hands, concentrating on Sonny’s hands and brushwork. “This guy is a master,” I’m thinking. And there’s Sonny’s vaudevillian-like showmanship. For example, grabbing the right lapel of his sport coat to flip open his coat — as if flashing the audience — in unison with bass drum accents.

But the key to it all are Sonny’s eyes. The body of an old man with the eyes of a child, eyes that dance and laugh, and study the people who have come to see this famous drummer who’s been all around the world performing before kings, queens, presidents, and millions of common folk.

Papa Jo Jones walks in with a newspaper folded under is arm, and struts up to just stage left of Sonny, and sits in a booth. Jo puts the paper out flat before him and takes a pair of wire brushes out of his coat pocket. The next thing you knowo, Jo and Sonny are trading fours. Sonny on his drumset, and Jo Jones on his newspaper, the table, even the wooden slats of the blinds that half cover the window behind the bandstand.

When that song is over, Sonny (over ten years Jo’s senior) sits staring at Jo. “Sonny,” says Jo. “I hope you never get as old as I am.” Sonny — expressionless — continues to stare at Jo. Finally he opens his mouth and in complete deadpan says, “Aw, you ain’t that much older than I am.”

Sonny Greer died on March 23, 1982 in New York City. He was 86. He had been with the Duke Ellington Orchestra from 1923 to 1951. And more than that, he was a pioneer, an original drummer. He will be missed, but more than he should be missed, he should be an inspiration for carrying on until he was 86, for his energy, for his contribution to music and drumming, and because he spent his life making a lot of people smile. 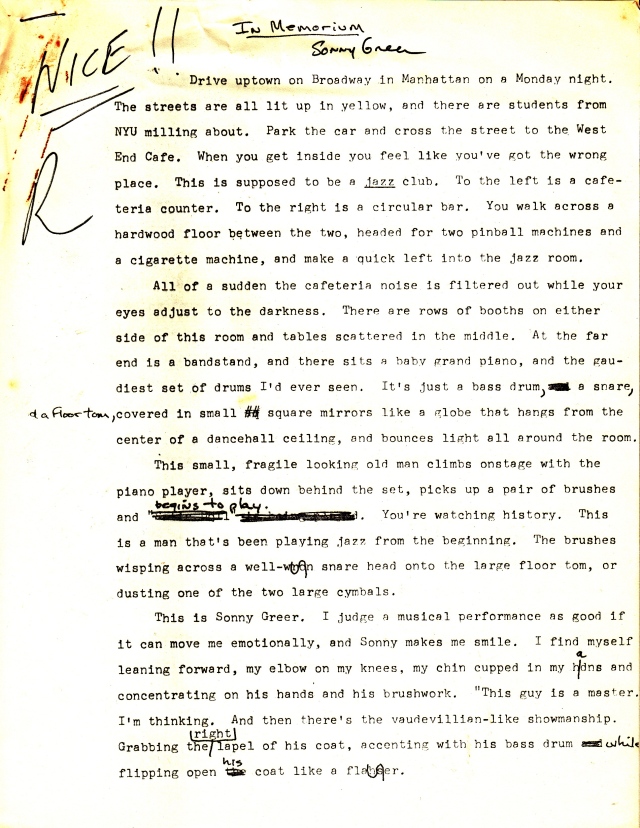 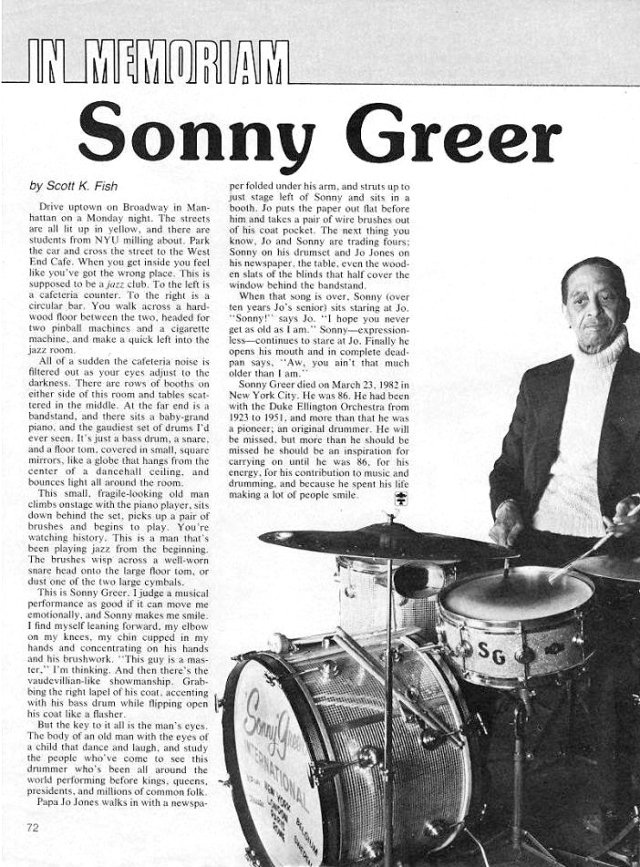