SKF NOTE: In 1989 I sat with Neil Peart, played him a few of my favorite drummer records without telling him anything about the song or the drummer. Our exchanges were meant for a music publication Chip Stern was creating. You can read the back story here.

Neil refers throughout this exchange to being in the studio working on an album. I’m not sure what album it was. This exchange took place in August 1989. Maybe someone can use that date to best guess the Rush album Neil is talking about.

I need to correct something. I tell Neil in our exchange Shortnin’ Bread was recorded in “the Sixties.” It was, in fact, recorded 1959. My Special Edition LP was released in the early 1970’s.

Also, in 1997, eight years after this exchange, Joe Morello accepted Neil Peart’s invitation to be a part of Neil’s Burning for Buddy Vol. 2 project.

Neil Peart: The first thing I noticed is the beautiful sounding drums. The tuning of them. It’s really sweet. I wonder if it was a more modern recording because more of the tonality seems to come through.

NP: Yeah. Nice playing. But ironically, the first couple of times that the drums and piano play together, they’re out of time with each other. I tend to blame the piano because he’s just not sitting well with the groove the drummer’s putting down. From a modern, metronomic point of view, where all records are made to mathematical perfection….

SKF: So, if they had been working with a click track….

NP: It’s just selective listening, I guess. I would think the piano player would pick up his groove from the drummer.

SKF: Do you have any idea who the drummer is? 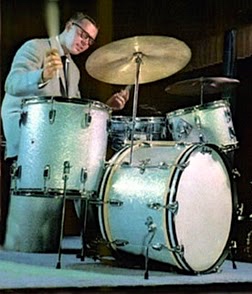 SKF: His bass drum always sounded great. I believe he used a wooden beater on a 22″ Ludwig bass drum.

NP: I’d wondered about the tom sizes too. So, that’s just a four-piece set.

NP: Is that a recording with Brubeck?

NP: [Neil laughs. He seems a bit embarrassed to know we’ve just been criticizing Dave Brubeck’s timekeeping ability.] It’s just because I’m in the middle of making a record. I’m so conscious, with overdubs, that we all respond to the groove when the drums are done.

I can mess with a click track pretty well. At this point I really know how to push it or pull it; and lay back with and give the feeling of ritard over top of the click — and still stay in with it.

So I get my groove laid down. When the others overdub it, it’s important that they have to sit [SKF NOTE: fit?] into my conception of the groove.

So when you hear previous records in any field of rock or jazz, where rhythm sections and other instruments are working together, you hear how different it was then; how much less demanding timekeeping was. It was what I’ve heard jazz musicians call “average time” — where you keep good time overall, but everyone sort of played with it a little bit. If a bit sped up or slowed down — it was entirley acceptable. Which it is. I’m not arguing or finding fault. It’s just ironic to look back now, to hear top musicians of the day on a simple groove like the one we just listened to, and they’re not quite congruent. They’re not hearing it the same way.

SKF: It could’ve been a first take.

NP: No doubt it was. And they’re both playing their part right. But they’re not sympathetically clinging.

NP: That’s very true in rock too. The big down beat gets pulled back so far. Or you can sit right on top of the beat, and seemingly push it forward. There have been times when I’ve put down a drum track and people will swear that it’s speeding up in a part. They just listen to it against a click….

SKF: And you’re right on the money.

NP: Sometimes I’m just learning forward — sometimes purposely — to give it that effect. Or pulling back to see how far back I can pull and still stay in time. Phil Gould from Level 42 is a master at that. Sometimes you can be tapping along with his beats, just about breaking your hand trying to come down as late on the beat as he does. And the timekeeping is perfect. Feels great.

There’s two different sets of terminology too. Perfect timekeeping and great feeling timekeeping aren’t necessarily the same thing. Modern music demands both. Apart from drum machines and all that, real drummers who are trying to work with modern music, are trying to make metronomic time feel human and impure. That’s certainly the mark of what a modern drummer must do.

SKF: Have you listened to Joe Morello before?

NP: My drum teacher use to play them all for me. Rightly or wrongly, my perception of Joe Morello was always: a Master Craftsman. A Master Technician of drums. And he was the Rudimentary King of the Universe! (laughs)

SKF: Do you recall listening to Joe on any specific records? Take Five, for example?

NP: Take Five I certainly remember to this day. That’s a phenomenal tune.

http://wp.me/P4vfuP-1
View all posts by scottkfish →
This entry was posted in SKF Blog and tagged Neil Peart. Bookmark the permalink.