Ed Soph: You’ve Got to Rely on the Time in Yourself 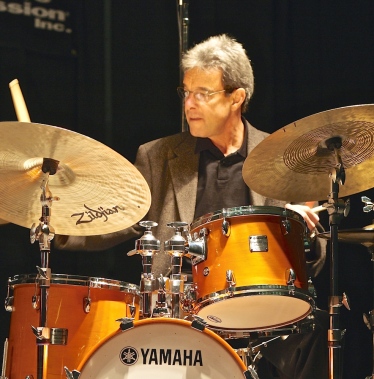 SKF NOTE: Ed Soph‘s thoughts here on big band vs small band drumming are from my undated interview transcript published as a feature Modern Drummer interview in the 1979 January/February interview. The circumstances of this interview are posted here. I was a freelance writer at the time. Ed was working primarily with Clark Terry, living in upstate New York.

My opening paragraph for this 1979 interview:

“When I went to interview Ed Soph, he and his wife, Carol, were living upstate New York in a beautiful old house in a wooded setting. Brooks gurgled by. A constant bird seranade. Across the Hudson River you could see West Point. And if the wind was right you could hear the drums and bugles while the cadets ran through their drill. It was almost the opposite of what you might expect a musician’s house to look like.”

Today I would no doubt describe the Soph’s rented “beautiful old house” as a quaint cedar shingled cottage. It was a great place in a truly beautiful remote area near Bear Mountain, New York.

I had seen Ed Soph in concert with Woody Herman‘s big band, and listened on record to Ed with Bill Watrous‘s and Clark Terry’s big bands. Now that I’m thinking about it, I had started taking drum lessons around this time to improve my ability to read drum charts.

When I asked Ed Soph about his approach to big bands vs small bands, Ed said:

Ed Soph: There’s really no that much difference. In a big band, when a soloist comes up front with just the rhythm section, it’s a small group. And when the ensemble comes in, then it’s a big band.

In  a small group situation there’s greater freedom of expression in that you can be more complicated if you want to be. No that that’s a good criterion for playing in a small group. I just feel like I have greater freedom to stretch the time or to turn the beat around — if it fits what the soloist is doing.

But that can lead to problems. With Woody’s band, when some of the soloists would come out front — like Steve Marcus, who is an adventuresome player — the rhythm section would get loose behind him and away from a very heavy metrical accent on [beats] 2 and 4. When it came time for the band to come in the trumpet players were lost. They didn’t know where their entrance [was]. They would come in all staggered because the guys couldn’t feel where the time was.

I particularly enjoyed Woody’s band when Andy LaVerne was on piano and Wayne Darling was on bass. We really got a small group rhythm section feel within the big band context.

But it took us a while to do that. We had to gradually break in the brass [players]. At first we tried taking the time out by their standards — getting away from a repetitive pulse. And it was just a train wreck.

We’d sit down with [the brass players] and say, ‘Look, you’ve got to rely on the time in yourself. You can’t be up there counting on your fingers and listening to the rhythm section. You’ve got to feel it.’

There [were] some bad feelings at first, but it worked out.

It was our fault too. We were taking a lot on ourselves, assuming a lot, going in behind a soloist and really stretching the time and expecting [the brass players] to be used to it.

Face it. Section players — Third, Fourth, Fifth chairs — in big bands are not really jazz players. They’re section players. And there’s a lot of good ones, but they get lost sometimes.

1 Response to Ed Soph: You’ve Got to Rely on the Time in Yourself