SKF NOTE: Hal Blaine was a great friend to Modern Drummer magazine while I was on staff. It would not surprise me to know Hal is still a great friend to MD. In the early 1980’s, when I was writing The History of Rock Drumming for MD, Hal was always ready, willing and able to help me.

I don’t remember the specifics of this transcribed conversation with Hal. An educated guess? Hal and I were talking on the phone, the conversation got around to topics I could use in my rock drumming history, and so, with Hal’s permission, I fired up my trusty Radio Shack suction mic and portable cassette recorder and let the tape roll. I transcribed this interview with a manual typewriter on looseleaf paper – which you can see in the photo at the end of this transcription.

When transcribing my Sharkey Hall and Jesse Sailes interviews for this blog, I thought it was Hal Blaine who put me in touch with both men. This interview proves my memory on that remains intact.

Caveat: Hal sounds pessimistic here at times. That was very, very unusual. Most of the time Hal Blaine was the consummate optimist.

Hal Blaine: I met Earl Palmer right around 1960. Earl was the drummer out here for the late ’50s. I probably had more influence from Earl than anyone else. Earl and I became friends and, later on, we’d work together whenever they used a double drum situation.

Jesse Sailes kind of taught me a lot of stuff too. Between Sharkey, Jesse Sailes, and Earl Palmer — that was one of the big, let’s say, Black influences in rock ‘n roll.

As a kid I played with all black people. All black. Until I got into the service. At about 16 or 17 was when I first started working with white guys in the Army. So, when I was 14 or 15, and I knew Sharkey Hall, I use to hang out with Sharkey a little bit. He was just beautiful. I use to go to jam sessions and things. Sharkey was doing a lot of records then.

Another guy that was doing a lot of records in the ’50s — and he turned out to be a total asshole, unfortunately — was Roy Harte. He’s the guy that owns Drum City. 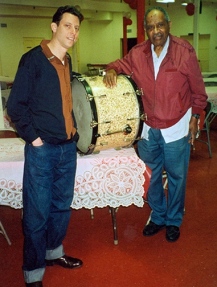 When I came along in the early ’60s — that’s when the thing became maybe more sophisticated. It started happening, technically, better. Recordings started getting better. There were more changes. Guys sounded like they were playing more in tune.

I don’t mean that as a gag. The early rock ‘n roll out of the studios was not out of the studios. It was out of garages! And the equipment wasn’t that good, with wire recorders and stuff like that. And they had strange sounds. Microphones picking up across the room. Well, with the Doppler effect it sounded like the guy was out of tune. From where the horn passed, to where it got picked up on the tape or something, a lot of it got out of tune. 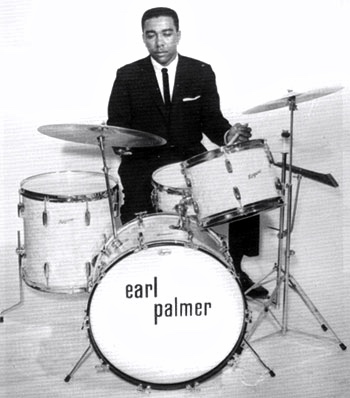 They were so infantile, those tunes. They were so baby-like at the beginning, with two or three [chord] changes, that the average jazz musician, or even learned musician, scoffed and laughed and said, “What kind of bullshit is that?”

It’s like a lot of guys today are saying, “What are they doing to us with this New Wave crap?” They forget, man. It’s evolution. And you’ve got to go with it. And that’s all there is to it. The world is changing.

Buddy Harman is another innovator. We both got out of the Roy C. Knapp School in Chicago. The same school at the same time. He went to Nashville and I went to Hollywood. I was at the school ’48, ,’49, ’50.

Most of the guys I know from my era were all guys that played shows, dances, bar mitzvahs — whatever! It just evolved. The rock ‘n roll thing was happening. You had to learn to play OOM dah dah OOM dah. Even then that beat was ancient history. You heard it from India. Every time you saw a camel movie they were playing that [beat]!

It’s a whole different world today. Today it’s so different. There is no more respect for parents. There’s no respect for school or authority. Nobody really seems to give a shit about anything. It’s a pity.

A lot of kids who want to be drummers today, they are only learning one thing. And that is whatever they see the drummer with Van Halen doing. That’s all they want to do. And that’s all they know how to do. And they don’t know that anything else exists.

There is only one favorite radio station that they listen to. And their favorite [music] tape. And that’s it.

It’s a shame because, one of the things about Roy Knapp was that you studied Music Appreciation and all the aspects of it. Like any other business.

SKF: Roy Knapp would hip you to all different kinds of music?

HB: Well, it’s just that everybody did. You were in the heart of Chicago — which was Polka country. South Chicago was black stuff. The West Side was Polish stuff and different ethnic groups. There was some Puerto Rican stuff. Mexican stuff. There was a lot of stuff around. And everybody was interested in it all.

Most of the guys that went to that school? They were interested in all of it. They weren’t just interested in Stan Kenton, for example, who was real popular then. Everybody didn’t just think “Stan Kenton.”

SKF: What did you have to learn to graduate from the Knapp School?

HB: Well, it was an eight hour a day school. I went for almost three years, five days a week. You had classes in sight reading, sight singing, music appreciation. And I was taking piano on the side. I was studying vibes with Margie Hyams. 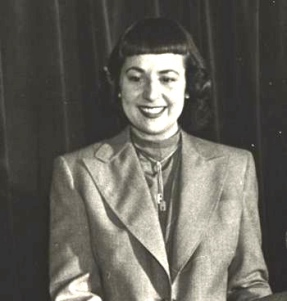 There was band. There was a get together — they had a long table, man, down the middle of one of the classrooms that was an entire felt table. The guys would sit with their sticks, side-by-side. There would be 20 or 30 guys, and everybody would be playing fours.

There was just a certain camraderie, a certain thing that happened. Like a medical school. And that doesn’t seem to happen today.

The point is: It’s not so much who your teacher is. It’s how hard you’re going to work with what you learn from your teacher. And from listening, and seeing, and watching. That’s the way I feel.

If you’re motivated enough…. I don’t give a shit if Buddy Rich is your teacher. That’s not going to make you the best drummer in the world. There are an awful lot of kids out there who think if they can study with a name, well, that might give them some great motivation.

It’s still not going to make them good.

But if they’re motivated enough, I don’t care who you’re studying with, it’s a matter of practice and learning and listening to everything and everybody.