SKF NOTE: Just now I was reading through my typed transcript of my 1977 interview with Mel Lewis. It is long! Forty single-spaced typewritten pages, which, of course, was heavily edited by about half for publication as my first or second Modern Drummer feature story.

This is Mel Lewis talking about Frankie Dunlop. Ninety percent of this is published for the first time. It adds to jazz drumming history, a brief but interesting story of two Buffalo, New York teenage friends who went on to become world-class jazz drummers. 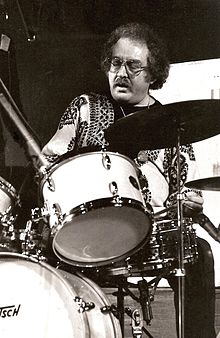 Mel Lewis: There was a lot of fine young musicians in my hometown my age. [15-16 years old]. I wasn’t the only one. Frank Dunlop came from Buffalo with me. Frank was a wonderful young drummer then.

Scott K Fish: Could he do shows and all that too?

SKF: You’re talking about the same Frankie Dunlop who played with Thelonious Monk?

ML: Yeah, that’s right. Oh, yes. Frank, to me, is an excellent drummer to this day. He hasn’t had all the good luck I’ve had. Well, he wasn’t always in the same place I was. I mean, it…. Wherever he worked…. He was with Maynard’s [Ferguson] band. He sounded great in Maynard’s band.

So, he had big band experience. ‘Course, he claimed he got a lot of that from me. He use to show me all of Max’s [Roach] licks. He used to come and study with Max when we were kids. And I would sub for him on his gig with George Clark‘s group, ’cause that was the only way George would let him go — if I played.

So he’d come back and I’d sit down and I would listen to what he just learned, and I’d pick it up. We were the two early Bebop drummers in Buffalo.

But I had big band experience and George use to insist that he [Frankie] listen to me. So we helped each other all the time. Frank and I were good friends. We still are. We don’t see each other as often as I’d like to, but it’s always fun.

SKF: Where is he? Is he still in New York City?

ML: Oh yeah. Well, he lives out of the City right now. I think he’s back playing with Lionel Hampton right now.

Frank has worked a lot of shows. He works the mountains ’cause he lived out in that area. Frank does a lot of the mountain work.

In Buffalo, he worked shows. He played in all clubs too. And with Maynard’s band. And with Monk! Oh, he sounded great with Monk.

[SKF NOTE: Near the very end of our interview, Mel Lewis said this about Frankie Dunlop: Frank Dunlop, who I’d like to hear with Basie‘s band.