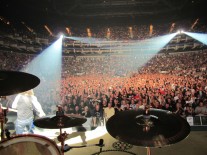 POV shot from behind the kit. Photo: Neil Peart

SKF NOTE: This is the last of my Trading Fours exchanges with Neil Peart. My friend and music writer par excellence, Chip Stern, had a very good, albeit short-lived, idea for a drummer’s magazine. I did some writing for Chip’s magazine, but I don’t know that any of it saw the light of day.

Leonard Feather had a longstanding Down Beat magazine feature called Blindfold Test. Feather’s concept: play a handful of unannounced recordings for a musician and get their objective reaction.

Chip used the Blindfold Test concept, calling it Trading Fours, as part of his drummer magazine.

Recently I found an August 1989 manuscript of a Trading Fours I did with Neil Peart. I think this exchange took place in Neil’s home.

The YouTube version of M’BOOM’s Epistrophy below is the same arrangement I played Neil, but not the same cut. The cut Neil listened to is on M’BOOM’s first album — recorded in the studio.

Neil Peart: Here’s the kind of music that I can understand why people want to make it, but I can’t understand why anyone would ever want to listen to it (laughs).

Scott K Fish: Why do you think people would want to make this type of music?

NP: Oh, it would be a lot of fun. Just for that reason alone. If you were down in the basement, a couple of guys with their vibes and drumset and tympani could have a good time! I’m trying to think of every human circumstance under which music can contribute to the mood. And I can’t quite find the one for that (laughs). Unless it’s while you’re smashing up your house.

SKF: Do you have any idea who it was?

NP: Ah! I almost said that, but I thought it was too Western. I thought their idea was to incorporate traditional African.

SKF: This was a Thelonious Monk composition. Epistrophy. The neat part was Warren Smith playing the melody and improvising on tympani.