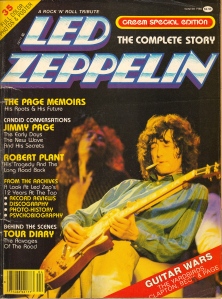 SKF NOTE: Flipping through this 35-year old magazine yesterday, I stopped to read something in a news article I had underscored in red ink said by John Bonham. It had me laughing, so I decided to share it.

“I’d like to have it publicized that I came in after Karen Carpenter in the Playboy drummer poll,” roars Bonzo as I entered the dressing room at the Chicago Stadium. “She couldn’t last ten minutes with a Zeppelin number,” he sneers.