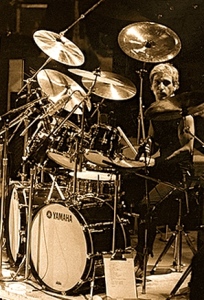 Did you know that Charlie Watts didn’t play drums on the Rolling Stones‘ 1974 hit “It’s Only Rock ‘N Roll (But I Like It)”? The band’s regular drummer yielded his sticks to Kenney Jones for the song.

Apparently Watts was nowhere around in December 1973, when the group was ready to record his drum parts for the song….

It wasn’t uncommon for [Ronnie] Wood to just call Jones in to play whenever a drummer was needed. “It was quite late. He’d call me up and say, ‘Kenney, we haven’t got a drummer. Can you come around and play on this?’ I gave Ronnie one of my drum kits so the drum kit was permanently set up there in his studio.”

When Jones got there, Wood recorded the session, leaving Jones and Mick Jagger alone in the room to record the song. “It was just Mick Jagger and myself, guitar and drums, and we did the track. Ronnie Wood came in, pressed the button, picked up the bass and played on it. I thought it was a demo…. I forgot all about it.”

After some aborted attempts to record the song with Watts (“They couldn’t capture the feel,” Jones said), the Stones used Jones’ demo version on the album.

“When I found out later it was actually me playing on drums on it, I called Charlie up and said, ‘I didn’t mean to play drums on your album’,” recalled Jones. “And he said, ‘That’s okay. It sounds like me anyway’.”