I first met Modern Drummer founder/publisher Ron Spagnardi probably in the summer of 1978. MD‘s office was the basement of the Spagnardi home at 47 Harrison Street, Nutley, NJ. MD was still a quarterly publication. Nothing fancy about the basement. I remember it as an unfinished basement with desks, tables, and lighting sufficient to produce and ship a magazine. MD Features Editor Karen Larcombe was there. So were Ron’s father, Leo Spagnardi handling shipping and receiving, and Carol Padner and Jean Mazza were responsible for MD‘s circulation. 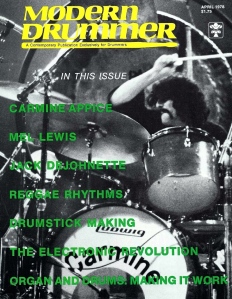 The April 1978 Modern Drummer with my first two feature interviews and cover story.

I don’t remember exactly why I was visiting. It was probably my interest in meeting Ron and seeing the MD operation. My first two feature interviews, Mel Lewis and Carmine Appice, were published in the April 1978 MD. Carmine was the cover story. So Ron and I had corresponded and worked successfully together. Our visit was likely the result of a simple conversation: “I’d love to come out and see the operation.” “Sure. Come on out.” For me it was just over a 100 mile round trip.

Ron was working on the layout for the October 1978 Steve Gadd cover story on my first visit. We both loved Gadd’s drumming, and talked about how Steve looked very unhealthy in the Aran Wald story photos. We were worried about him! Gadd was very thin with large, dark bags under his eyes. He was in a recording studio playing a five-piece single-headed Ludwig drumset, Evans heads on the toms, a very worn, white-coated head on the snare. Two paper towels taped left/right on snare top head for dampening.

One of Aran Wald’s Steve Gadd photos from the October 1978 Modern Drummer.

Ron didn’t know if Gadd’s drumset was his own, the recording studio’s, a rental – no clue. We were both surprised Steve was playing single-head rack toms. It was so exciting to have that “behind the scenes” look at Steve Gadd photos few people had seen. This was many years before the internet. Photos of any popular drummer were limited to album covers, magazine photos and ads, drum and cymbal catalogs, and maybe music store posters. Ron seemed a bit apprehensive about what I might be thinking of MD‘s office/basement. Perhaps like “Pay no attention to the man behind the curtain.” in the Wizard of Oz. But, I thought it was all great and exciting.

The October 1978 Modern Drummer Ron Spagnardi was working on when we first met.

Ron always had a very mild-manner and even disposition. Our meeting was friendly and brief. And when it was over I drove back to my home on Long Island, NY.

In 1980, when I was hired as MD Managing Editor, the magazine had grown to six issues yearly, and was about to publish nine issues yearly. The offices were in Clifton, NJ, but occupying one floor of a modern office building.