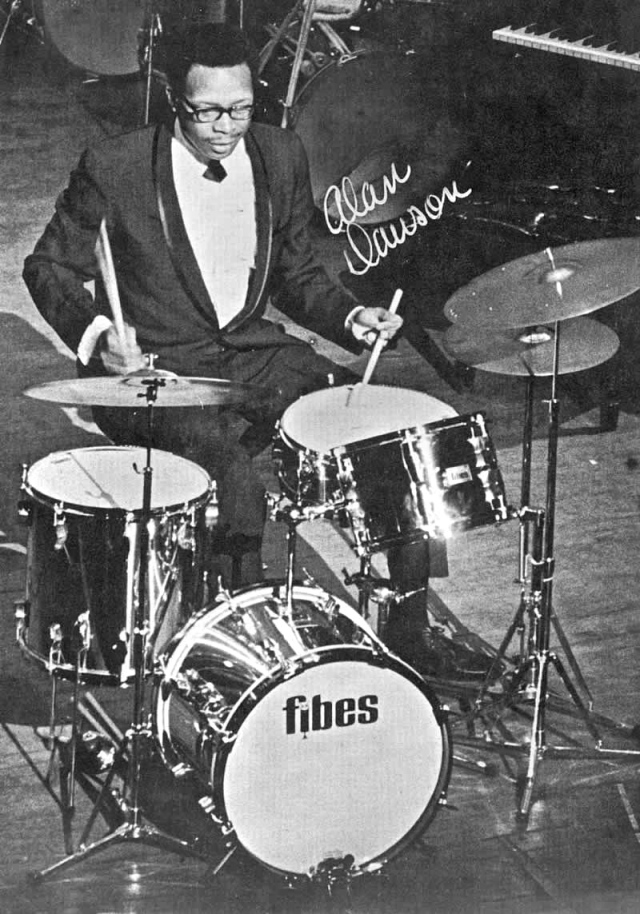 SKF NOTE: In 1985, Alan Dawson invited me to his Massachusetts home for this interview, part of which was included in Modern Drummer‘s 10th Anniversary issue January 1986. As time allows I am converting portions of the Mr. Dawson’s interview tape into digital audio excerpts.

In this excerpt I asked Alan Dawson to clarify his remarks on drum innovators. Enjoy.

Scott K Fish: Do you feel there’s a difference in being innovative and being an innovator?

Alan Dawson: Maybe I’m splitting hairs a little bit. When I think about an innovator I think of the person who really seems to have taken something, and seems almost completely in another direction. [The innovator] bursts on the scene, and people don’t understand what he’s doing, that they have to catch up.

A person can be somewhat innovative if he can take somebody’s style and make something else out of it.

SKF: So an innovator is someone whose style can’t really be traced back to anybody?

AD: Yeah. Eventually you probably can trace it back.

When I first heard Max Roach I certainly wouldn’t have been able to say, “Well, he sounds like Jo Jones.” He didn’t. But he was still influenced by Jo Jones. So I would consider Max an innovator, yet in retrospect, I know that his style didn’t come out of nowhere.

When somebody’s reactions to the very same things that everybody else has been exposed to turns out to be so completely different, you think that that person couldn’t have been exposed to so-and-so at the outset. Later, you find differently.

SKF: Would you consider Elvin Jones an innovator?

AD: Yeah, yet I realize — and Elvin will tell you — that he came out of Roy Haynes, among other people. Elvin doesn’t sound like Roy Haynes, but it’s obvious to me where he came from.

Jo [Jones] was one of Roy’s strongest influences in the formative stage. Roy Haynes doesn’t sound like Jo Jones, but it’s obvious to me where he came from.

In my formative stage Jo Jones had a tremendous influence on me. Max Roach had a very strong influence on me, but not as strong as Jo, because I wasn’t quite as young and impressionable.

Since then there’s been plenty of other players who I’ve listened to and admired.

If I stop splitting hairs I’d have to think that the last great drum innovator was Tony Williams.

Talking about trends and styles is hard for me to do. I’ve been pretty much doing my own thing as far as playing is concerned. My contact with what other people are doing is basically through my students.

More and more I’m appreciating the importance of historical perspective.

If a person knows where a particular thing he’s doing come from, and in turn, where that comes from, he can be much more convincing in playing whatever he’s playing. A person who plays strictly from the top tends to be playing somewhat superficially. It might not be all that evident to him, or even to people he’s playing with. They might be in the same position.

There are so many things. If you start tracing back you’ll find that there’s not too much that’s new. Sometimes, by looking back, you’ll get a glimpse of the future. If you lived long enough you could stand in one spot, and at some point in time, you would be an innovator. Of course, that might take thousands of years.

I don’t try to look too far ahead in a lot of things. There’s so much I figure I might miss that going on right now.