Sharkey Hall: Third Man on Call in the Studios

Posted on September 8, 2015 by scottkfish

My transcript isn’t dated, but this phone interview probably happened in 1981 or 1982. Mr. Hall says here that he is 60-years old. If someone can find his birth date, we can tell the year of this interview.

I read this transcript today for the first time in about 35-years. There are several neat factoids that may still be news. For example, Hall says he recorded with the group The Diamonds. That means he may have been the drummer on my first 45-rpm rock and roll record, The Stroll, when I was about 7-years old.

Also, Sharkey Hall mentions working in a trio led by violinist Ginger Smock. Thanks to the internet, there is info available on Ginger Smock, including YouTube videos of her playing jazz violin. She was good!

Finally, as of this writing I have no photos of either Sharkey Hall or, one of his drummer influences, Rudy Traylor. If anyone can point me in the direction of either or both of those, I would love to include the photos in this post.

Sharkey Hall: I’ve known Hal Blaine for many, many years. We were kind of like young men together out here. I really don’t know what to say.

Scott K Fish: I wanted to ask you about your contribution to the music of the ’50s. 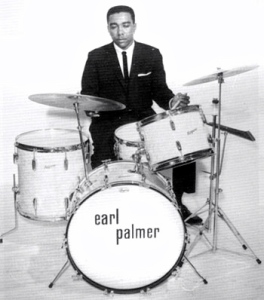 SH: Well, I think a fellow you would probably like to talk to would be Earl Palmer.

SH: You have, huh? Well, out here, Earl and Hal, they were kind of like pioneers in the business. They did many things.

In my case, I did a lot of ghost drumming for different outfits like The Ventures, The Beach Boys, The Diamonds.

SKF: Ghost drumming for The Ventures?

I guess the biggest thing that I was on was Ernie Freeman‘s Raunchy, and Jewel Akens‘ Birds and The Bees. They’re about the only two to come to mind now that were like gold records.

SKF: Do you remember what stuff you did with The Ventures?

SH: That was way back. I don’t remember at all.

SKF: Were you coming from a jazz background?

After I got out of the service I was primarily a jazz drummer. And I don’t know how it happened, but I ended up working with…, in a club with Ernie Freeman out here. And about that time Earl Palmer came to town with Fats Domino.

He used to come in the place where I worked and I let him sit in. And at the time, because he was working with Fats Domino, a lot of the jazz fellows didn’t think that he could play jazz. So I invited him to come on and sit in.

Come to find out that he had been expressly brought out here by Aladdin Records to be their staff drummer.

The next thing I know my phone started ringing with referrals from Earl because he had gotten quite busy. Between that and when Raunchy became a hit, well, then I ended up for awhile being about third man on call in the studios out here for about ten years. That’s kind of the way it happened.

Of course, I had known Hal out in San Bernadino when he was a teenager. We used to hang out together down there. And we didn’t see one another for quite some time, and then he walked into the studio where I was working. And come to find out that, he had been on the road with Presley, I believe. And he had made quite a name for himself.

SKF: Are you and Hal roughly the same age?

SKF: Who were the drummers who influenced you when you were starting out?

SH: Guys like Old Man Jo Jones, Shadow Wilson. And, of course, everybody had to be somewhat influenced by Buddy Rich and Gene Krupa because of their great popularity.

And there was another drummer that I admired that never got a whole lot of credit. But he was with the Erskine Hawkins Band and his name was Rudy Traylor. I picked up a few little tricks that I saw that he used that kind of fascinated me and I used them through the years.

Those were my main influences as a teenager.

SKF: When you were ghost drumming, was it mostly with groups or did you get into television or radio?

SH: Mostly phonograph records. Of course, it wasn’t in the rock field out here. But on the West coast, why, I was a member of the… a group that had a t.v. show called Rhythm Review.

Incidentally, for what it’s worth, it was the first Black group Local in LA to have a t.v. show that was sponsored. That was about 1957, I believe it was. It was kind of a variety show. It was a trio. Organ, jazz violin, and drums. The violinist was a lady named Ginger Smock. She was the leader. I can’t think of the organist’s name.

On the show I was doubling vibraharp and guitar on some things, and did sing a few little novelty numbers.

But that was kind of a high spot for me.

SKF: So you play proficient vibes and guitar too?

SH: Well, enthusiastically if not good.

SKF: You must have seen a lot of changes musically.

SH: Oh yeah. I started playing professionally in 1939 and joined the union in about 1941 out here. I did it from the age of 3. And about the age of 11 I finally started going to school on a regular basis.

About the time I got out of Pasadena Junior College — it wasn’t long before I went in the service. I was in infantry for awhile, and then I landed in a Special Services outfit.

SKF: This was World War II.

SH: Yeah. Arizona was the original home of the 9th and 10th Cavalry. Back up in the mountains there. They finally found out that I was a musician, so I spent about two-and-a-half years in the Army Band in the Special Services outfit.

I got out of the service about ’45 and kind of bummed around, playing little local clubs, and that’s when I ran across Hal.

At that time I really wanted to be a Bebop drummer, but I couldn’t make a living at it. So I had to play more commercial style.

Then all of a sudden in the early ’50’s the kids found the rock thing. And so I stepped from jazz right on over into that.

SKF: Was that a tough transition for you?

SH: Psychologically it was, for awhile. Because it was just like anything else. One of the things that helped me was my career. For awhile there I wondered about the appeal. And I thought for awhile there that it was kind of like a step backward.

But as the thing began to get a little more sophisticated — then it became a challenge.

Of course, some of the guys ut here with the heavy reputation — well, they kind of thought it was a passing fancy. As a matter of fact, a lot of the guys — I won’t mention any names — a lot of the guys actually refused to do rock dates. So consequently, that gave me a clear shot at the number three slot.

SKF: The number one and two would be Hal [Blaine] and Earl [Palmer]?

SKF: Are you playing now at all?

SH: Oh yeah. I’m still active. I do…. It’s kind of like semi-retirement. At my age now I kind of like to work weekends. I work clubs or society casuals. Things of that nature. I do a little record date every once in a while. I’m not working as often as I was. I do a commercial or two during the year.

That’s about the way it is. I’m kind of comfortable with it.

5 Responses to Sharkey Hall: Third Man on Call in the Studios