Posted on December 9, 2016 by scottkfish

SKF NOTE: So far, so good. That’s my first impression of Deirdre O’Callaghan’s newly published book of her photos and “personal conversations” with 100 drummers, The Drum Thing.

In my February 2016 Life Beyond the Cymbals post, What Makes a Music Photographer Good?, I wrote about photographers I worked with as Modern Drummer‘s managing editor, summing up my admiration with, “A picture is worth 1,000 words. As much as I love writing, I have always admired photographers and cartoonists with the gift, the skill, of capturing a whole story — or endless stories — in one image.”

The drummer is usually the least well-known member of any band. Yet behind every frontman is the person keeping the beat, and often acting as the music’s driving force. In these portraits, Deirdre O’Callaghan places drummers…in their private rehearsal spaces and residences—from studios, bedrooms and basements to garages and gardens—allows her to capture the true essence of their personalities and lifestyles.

From what I’m seeing and reading this morning online, Dierdre O’Callaghan’s photojournalism here nails it. Her photos of drummers are quite good, often superb, with moving surprises in her use of drummer’s personal inanimate items — broken 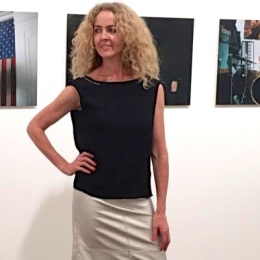 Finally, Ms. O’Callaghan’s treatment of drummers, in her photography and writing, first as human beings, is a valuable contribution, perhaps especially to upcoming drummers raised with a steady stream of musical image without substance.

I leave you — hopefully with Dierdre O’Callaghan’s blessing – of a glimpse of The Drum Thing through my edited words (below)/photo (above) segment of her portrait of Steve Gadd.

Back in the ’70s no one thought that drugs were ever going to be a problem — we all found out different later on. I was getting called to do work with people who were my idols; if it was a choice to try and stay awake or go to sleep, I’d want to stay up and play music. And part of my life was falling apart. I started using so I could work and then at some point I was working to use, and I didn’t even know what had changed. It was a subtle change.

Music was the only thing I could get lost in and still feel like I was able to give something good to somebody because, in a lot of other areas in my life, I wasn’t able to keep it together. I held on to music for dear life because that’s the only thing that made me feel that I was still connected.