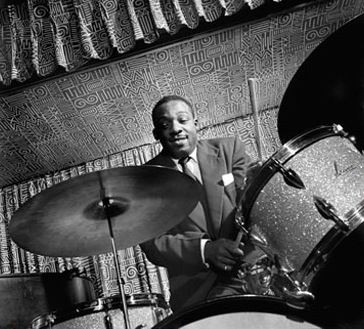 Pianist Dick Katz said in an interview with Ira Gitler, “People don’t know that [Kenny Clarke] had one cymbal. It wasn’t very big, and we used to call it the magic cymbal, because when somebody would sit in on drums, and use [Clarke’s] set, it would sound like the top of a garbage can. But when he played it, it was like fine crystal.

‘He kept the cymbal level, like a plate, and he played with a short, side-to-side wrist motion, and here are these guys — some people today — who look like they’re winding up to hit a home run to simulate the same effect.

“To play softly — strong, but at a low-volume level — is exceedingly difficult; particularly on drums. Most drummers can’t play soft because they don’t have the muscular control. Kenny Clarke used to say this: ‘You don’t beat the drums — you play them.'”