Drumming: Don’t Beat Yourself Up Over It 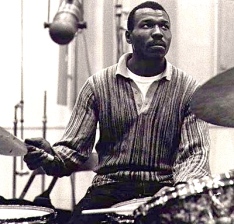 SKF NOTE: Growing up, it seems every time I saw one of the great jazz drummers perform, I was always surprised by how relaxed they played. Max Roach, Elvin Jones, Roy Haynes, Sonny Greer, Art Blakey, Joe Morello, Buddy Rich, Steve Gadd, Jack DeJohnette — all of them were very relaxed behind their drumsets.

I don’t know why I was surprised. I don’t know why, just hearing these drummers on record or radio, I imagined they must be wailing the tar out of their drums and cymbals. Maybe it was the posed album cover photos of grimacing drummers, sticks in hand, arms extended as far upward as possible. Maybe it was the exaggerated way drummers fake played along with their records in old black-and-white movies.

It’s not that these great jazz drummers were incapable of playing loud. They could play loud alright. But their volume had more to do with the open way they tuned (tensioned) their drums, and more to do with maximum power from very little physical movement — like snapping the wrist. 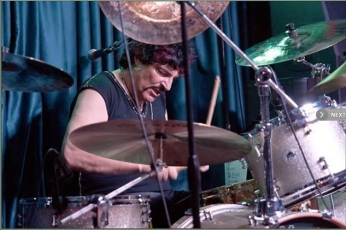 Once I asked Carmine Appice why famous rock drummers, playing with p.a. mics all over their drumsets, were still bashing their drums and cymbals. Shouldn’t the mics and the sound engineers enable rock drummers to play more relaxed while keeping up with the volume of electric guitars, keyboards and vocalists? I said, Max Roach plays plenty loud when he needs to, but he never bashes his drumset.

Carmine’s answer was that rock drumming is full body drumming.

I don’t know. I still see stories of famous rock drummers, miked to the gills with torn flesh and muscle injuries. I never see that about jazz drummers. I understand the show biz part of full body drumming. But what’s the point of having tons of mics and giant p.a. systems if drummers are hurting themselves, playing as if they were using no amplification systems at all?