SKF NOTE: This interview circa 1986-87 is from my sit down with Alan Dawson in his Massachusetts home for Modern Drummer‘s 10th Anniversary issue. I was freelance writing again for MD. Some of what Alan says about drums he endorsed was published then, some is published here for the first time.

Finally, Alan’s mention of the Martin Fleetfoot bass drum pedal was the first I had ever heard of it. My friend, T. Bruce Wittet, gives a nice history of that pedal here on his blog.

People said about fiberglass, “Oh, man. There’s no soul to that.” I loved them. I loved the Fibes that I was playing.

I hear some purists talking about older wooden drums that were made out of solid maple rather than the plies. I don’t think that makes a big difference. Not just a blanket issue. I’m sure you’d find an individual drum that sounds great, and an individual drum by the same maker that doesn’t sound great.

Ludwig is the third company I’ve been with. I was with Gretsch and I left them to go with Fibes. I didn’t leave Fibes to come with Ludwig. Fibes was gobbled up.

I do try not to endorse everything that comes along just because I get a chance to. It does strain your credibility. Even the youngest, most naive person out there is bound to say, “Wait a minute! I just heard him say that was great last month. Now he’s saying that this is fine now.”

I, along with many other jazz drummers, I’m sure, were influenced by Max [Roach], who first was with Ludwig, but then went with Gretsch. I was influenced by that and the fact that at one time Gretsch seemed to have just about every jazz drummer of note. So I wanted to played Gretsch.

I played them for a number of years before I endorsed them. The first brand new drumset I was able to afford, in 1950, was Gretsch. I enjoyed them. I was very much influenced by all these other Gretsch players, but I wasn’t sorry about it when I did play them.

Scott K Fish: Did you use Gretsch hardware? 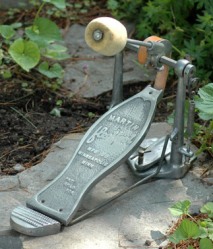 AD: No, but not by design. I had a golden Ludwig bass drum pedal that preceded the Speed King. It had twin springs outside of the posts. I bought the Speed King when that broke.

When I bought my first Gretsch set I already had cymbal stands and accessories. The Gretsch pedal was a good pedal though. I had the Gretsch first and then switched to a Camco pedal.

Later, I traded with someone who had a Martin Fleetfoot pedal — which was a prdecessor to Camco and Gretsch. It had a better action than the Gretsch and the Camco because of the shape of the cam on it, which was more rounded. It was similar to the DW chain drive pedal.