Clifton James: I Wanted My Own Style of Playing

Posted on December 9, 2015 by scottkfish 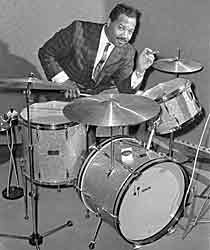 If you have not read any other of these background interviews, the back story is here.

In the early 1980’s I was having a very tough time identifying the drummer on Bo Diddley’s rock classics. I found out doing another background interview with Blues giant Willie Dixon.

Somehow I was able to get Clifton James on the phone from his workplace in Chicago, the Ace Hose & Rubber Company.

I always hoped, while conducting them, these background interviews would yield new information about the History of Rock Drumming. Like mining for gold or buried treasure. Mr. James mentions two blues musicians I have not heard to this day: L.C. McKinley and McKinley Mitchell.

Clifton James was not very talkative. His answers were polite and direct, but giving minimum information. He had been off of the music scene for awhile, with little — almost no — interest in playing again.

But, thank you, Clifton James filling in several historic blanks for me. You will always remain in the top tier of my favorite rock and blues drummers.

Clifton James: I did a lot of things with all of them: [Howlin’] Wolf, Muddy Waters, Jimmy Reed, Jr…. Well, you name them.

Scott K Fish: You were the drummer on the Bo Diddley stuff, right?

CJ: Yeah, I’m his original drummer. We started out together. I’m the one that gave him that beat.

SKF: Now, that’s what Willie Dixon told me. How did that beat develop?

CJ: I don’t know. It just came to me. Well, before I started messing around with him, I was at home and I was just beating out something. That’s all. I met Bo and we started playing together in clubs and things, around here in Chicago, in different places, for little or nothing. Matter of fact, it was nothing! Five and six dollars. Crap like that.

SKF: Willie Dixon told me that you were very much into tuning your drums to get a melodic sound out of them.

SKF: He said you had no hi-hat on those recordings.

SKF: But at the time nobody else was playing that that tom-tom style. Was that your idea?

CJ: Yeah. On that particular tune — Bo Diddley and Pretty Thing — and quite a few numbers, I did like that. Then Dee Clark came out later on with his Hey, Little Girl in the High School Sweater.

SKF: You played Killin’ Floor with Wolf, didn’t you?

CJ: Yeah. I did a lot of things with Sonny Boy Williamson too. McKinley Mitchell. And L.C. McKinley also. Buddy Guy. Little Walter.

SKF: Frank Kirkland get most of the credit for the Bo Diddley records. What was his role? Wasn’t he the drummer on the road with Bo?

CJ: No. Well, I was at first, then I quit. I left Bo because things wasn’t right. But he would always wind up calling me back. Things still didn’t work out.

SKF: What drummers and music influenced you?

SKF: Do you think that’s where you got a lot of the melodic ideas that you were playing?

SKF: Are you from Chicago originally?

CJ: Yeah. Originally I am. 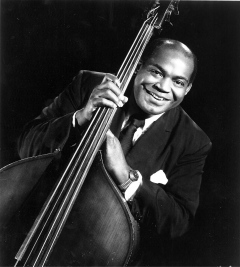 SKF: Willie Dixon though you might have been on some of Chuck Berry‘s hit records.

CJ: One, I believe. I can’t remember what it is. It’s been so long. They didn’t put your name on any records then. They just started that not too long ago.

Also, I did some things with Little Wolf, Jr. Little Wolf. That’s what they called him. I’ll be playing with him Saturday night at the Dallas Club with Albert King. He’ll be on the show too.

I had really stopped playing. I don’t play no more, really. But he asked me would I do this.

SKF: You kind of got out of music for a while, huh?

CJ: Yeah. Period! About two weeks ago I worked on a show with Bobby “Blue” Bland at the same club. They’re trying to ease me back into it, but I don’t think I’ll go. The money’s not right.

SKF: Well, I’m hoping this article will spark some interest. I mean, just the fact that you created the Bo Diddley beat. I mean, that was more your beat than Bo’s, right?

CJ: Yeah, in a sense. You might as well say that. There’s been a couple of tunes that I recorded with him and I never did get no money from the sessions. I mean, I got my session money but I didn’t get any royalty money from the records that I wrote. So this is what kind of turned me off too.

SKF: How was it working with Jerome Green in the studios?

CJ: Oh nice! That was our maraca player. And Billy Boy Arnold. He was playing the harmonica. And a fellow we called Buttercup during that time was on guitar. And James Bradford was playing bass.

SKF: Did you just get together with Jerome in the studio?

CJ: No. He was playing with us all the whole time when we was making them little four and five dollars a night. That was the original band. We called ourselves then, Ellis McDaniel and the Hipsters. That was our name.

SKF: Did you work out stuff between yourself, the bass, and Jerome?

SKF: How was it different working with Howlin’ Wolf and Bo Diddley? Did you have to change the style of your drumming?

CJ: Yeah. Most definitely. I had to get more funkier with Wolf. ‘Course, we had quite a few numbers too that we played that were real funky too. The old Jimmy Reed theme and stuff.

SKF: Do you remember what Wolf stuff you recorded?

CJ: Hey, there was so many of them. Also, with Sonny Boy Williamson. I made quite a bit of  tunes with him.

SKF: It’s hard to hear on some of those records. Were you using cowbells too?

SKF: Do you remember the drumset you played on?

CJ: Yeah. WFL. It was four pieces. I use to do a lot of brushwork too. Like on one particular tune: “You don’t love me / You don’t care / You just want me….” I forgot the name of it. All those records from then got stolen from me though. When they broke into my house.

SKF: They took your record collection?

CJ: Yeah. All the ones they didn’t break. They had broke them all up on the garage floor and out in the yard.

CJ: I don’t know! Just stealing, you know. A lot of pictures I had. Newspaper clippings.

SKF: You have no idea who did that, huh?

SKF: Did you know the other drummers on the scene, like Odie Payne and Freddie Below?

SKF: Did the drummers ever sit around and kick around ideas?

CJ: No. The only ones we would talk to most would be me and Below. He was my favorite though.

SKF: He was something, huh?

SKF: Did you ever trade licks?

CJ: When we would do that mostly is when I’d meet him, like up in a club or something like that, where he’d be playing. Then we would exchange questions. Sometimes in the studio.

SKF: Did you work together in the studio sometimes?

CJ: No. At different times.

SKF: Did you know Odie Payne at all?

SKF: He came after Below and yourself, right?

CJ: No, it was around the same time, because he use to work with Elmore James. I use to kick around with a lot of the cats playing.

SKF: So are you thinking about getting back into playing again?

CJ: Well, not too much, to be honest with you.

SKF: Where are you working now?

SKF: If you had to describe your style of drumming, how would you describe it? What made you different from everyone else?

CJ: I would have to say: Myself. ‘Cause I never really did want to play like nobody else. Because if I did that, then that wouldn’t be me. If you play like somebody else, then it’s not you. I wanted my own thing. My own style of playing.

SKF: Do you remember any other drummers that played on Chuck Berry’s records?

CJ: I think Al Duncan played on a couple of them. I’m not sure.

CJ: I knew Jasper. I think he was from St. Louis.

SKF: I wonder if Below did any of Chuck Berry’s stuff.

CJ: I believe so.

6 Responses to Clifton James: I Wanted My Own Style of Playing