What Is It Like Playing Drums in a Band? 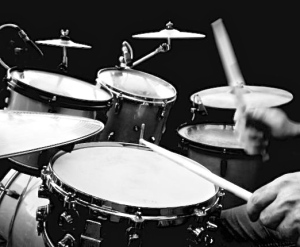 SKF NOTE: Last night a new friend, a non-musician, asked me two drum questions: Can you explain what it’s like playing drums in a band? Does music need drums?

I gave her non-technical answers. Here’s what I said:

Next time you’re listening to your favorite music — rock, jazz, blues, country — imagine how it sounds without drums. If you can, that’s a quick way of answering your second question. Technically, most music doesn’t need drums: Solo pianists and guitarists. Duets. String trios and quartets. Folk singers. A cappella groups.

But drums add to music definition, punctuation, shading and power. A drummer’s basic job is to hold a song and a band together by keeping time. It’s the same idea as when parade groups march together. A parade group where everyone is marching as they see fit might be amusing, but it’s no way to have a parade group.

With bands of any size or musical style, the musicians should be playing together, in sync, like a team.

What is it like playing drums in a band? Well, when the other members of the band can keep good time on their own. When they can play songs tight together without the drummer — that makes the drummer’s job much easier, more enjoyable.

Have you ever driven a car with steering that pulls persistently right or left? Keeping a car like that in the center of the driving lane is what drumming feels like when one or more band members has a serious problem keeping time.

In bands where timekeeping is a given, where none of the band members needs the drummer or anyone else to keep time for them — the drummer still keeps time, but he or she can spend more time interacting — having musical conversations — with other band members.

In those instances, playing drums in a band is like one of those days — sunrise to sunset — when everything is perfect.

http://wp.me/P4vfuP-1
View all posts by scottkfish →
This entry was posted in SKF Blog and tagged Drummer, Scott K Fish. Bookmark the permalink.