SKF NOTE: As with many other drummers, I was hooked on Chico Hamilton‘s playing from the moment I heard him with the Gerry Mulligan/Chet Baker Quartet on Walking Shoes. The pianoless quartet used swinging, methodical arrangements. Chico’s drumming, both accompaniment and soloing, followed the same pattern.

Hamilton is also the first drummer I saw using single-head drums. He said that came about out of necessity during the World War II era.

Mike Dolbear: This single-headed thing evidently came about by accident because during the war he was unable to get calf-skin heads for his drums and if he broke a batter head he would simply replace it with the head on the bottom and this would of course make the drum sound more open. He began to like the sound it gave and once he got together with Gretsch, those were the sort of drums he asked them to make for him albeit with slightly deeper-than-normal shells. Full Story

Modern Drummer: I started that during the war. It was hard to get calf heads, so if I would go through a batter head, I’d replace it with the head from the bottom. I got so used to hearing the sound that way that when Gretsch started making my drums for me, that’s what they made. Full Interview

What I’ve always found more curious than Chico’s single-head drums are the unique dimensions of his tom-toms, custom made for him by Gretsch. If you look close at this Gretsch ad you will see Chico’s toms were made single headed. There are no lug holes drilled for mounting bottom heads. (I believe this is another of photographer Chuck Stewart‘s great series of Gretsch ads.)

If you’ve not heard Chico you’re in for a treat. In addition to his playing with Mulligan and Baker, he led several unique groups of his own. 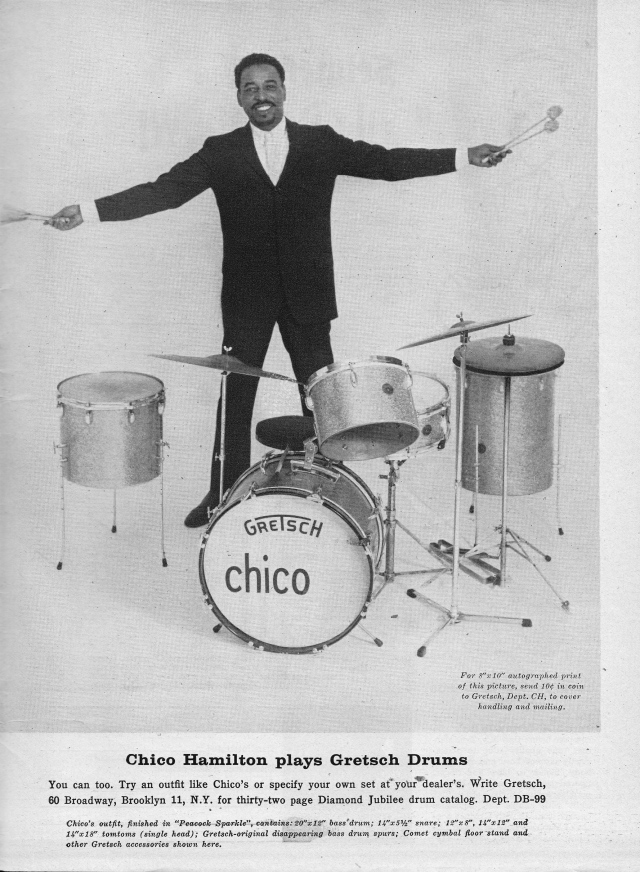