Jon Fishman: Jazz Was This Monster Around the Corner 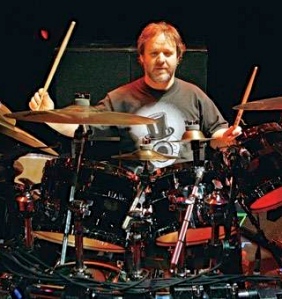 Jess Novak: You took lessons from [Syracuse, NY drummer] Dave (Hanlon) when you were 13. Why drums?

Jon Fishman: My mom took me to see Buddy Rich when I was 10. I was all [into] Buddy Rich at that time, but then Dave had a picture of Louis Bellson on the wall, so I checked him out and was introduced to this whole world of big-band drumming. Then Sonny Payne. I discovered all that through Dave.

JN: What about rock drummers?

JF: I heard “When the Levee Breaks” (Led Zeppelin) on the radio when I was a kid. Something about it—the articulation of that beat and how it goes with the song. There are a lot of Zeppelin songs where the drums go along so well with the melody. I was learning Zeppelin from the time I was eight to 13. Zeppelin, Hendrix, The Who. I was a closet guitar player, too. Zappa—all his drummers are their own category.

JN: What changed after you took lessons with Dave?

JF: When I was 13, jazz was this monster around the corner. It was an entirely different level of coordination. You know, “Jazz is the teacher, funk is the preacher and one without the other, you have nothing but the blues.” I think that’s true. For drummers, or any instrument, it seems like with jazz and classical, or Afro-Cuban music—you stretch your limits. You get independence and coordination you won’t from just rock drumming. I wanted to learn how to play a swing ride and the other figures you play on a snare and hi-hat. I went to Dave for that.