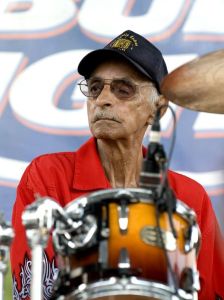 Etienne, known for his rhumba beat, was a studio musician at J. D. Miller’s famed studio in Crowley, which produced national and regional hits for Slim Harpo, Guitar Gable and many others. In the studio’s meager beginnings, Etienne played a cardboard box on Harpo’s “Scratch My Back,” which became a No. 1 Billboard R&B hit in 1966.