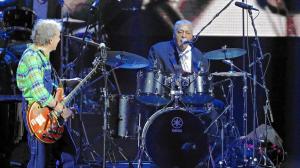 When Bob Dylan appeared at the Newport Folk Festival on the night of July 25, 1965, he had a Fender Stratocaster electric guitar around his neck. Three of his five backup musicians also took up electric instruments. Minutes into the first song, “Maggie’s Farm,” roughly a third of the 17,000 people in the audience began to boo. The media covered the rude reaction the next day.

Mr. Dylan couldn’t have wished for a better outcome. In the months ahead, the 24-year-old singer-songwriter was transformed from folk’s boy wonder into the poet equivalent of Elvis Presley.