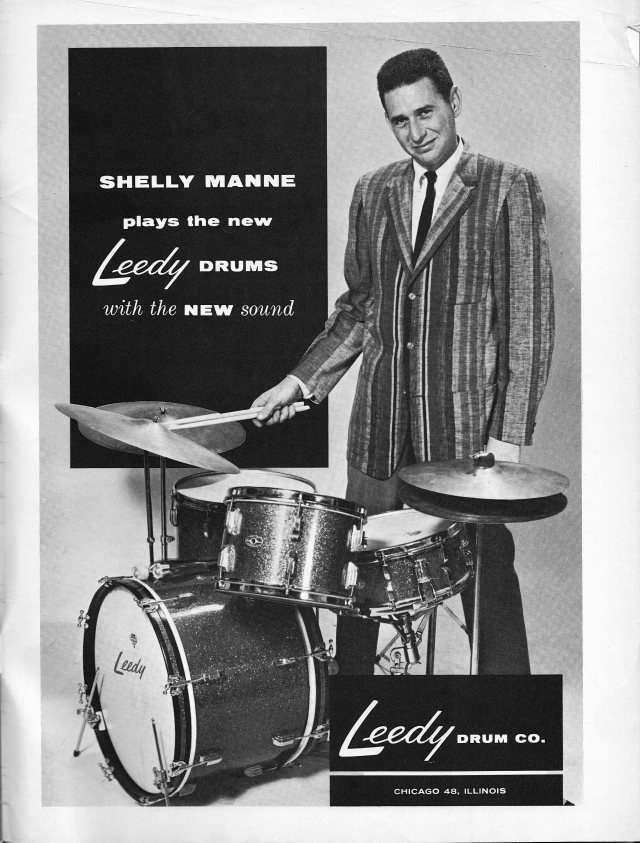 SKF NOTE: Growing up, Down Beat magazine’s writers, editors, and reviewers were inspiration to this aspiring music journalist. They set the bar high in their knowledge of music, particularly jazz, in the maturity with which they interviewed musicians, in their choice of topics. Those DB writers and editors seemed never to shy away from the tough topics.

Shelly Manne: I don’t think I’ve practiced two hours in 20 years. But it’s different with me than it is with a lot of younger guys because I’ve been playing practically every night for 20 years. If everybody had a chance to play constantly, I don’t think they would spend that much time practicing.

I believe a guy should practice enough to control his hands and be able to do certain things he wants to do with his hands, but I don’t believe he should practice to the point where the hands control his mind.That’s what happens with a lot of guys. Their hands start doing the thinking for them.

[A drummer’s] thinking should be a year ahead of the technique. That way you are controlling the hands from your head and your heart, and you’re making more music, I feel. It’s more spontaneous. It’s nothing that’s figured out in your living room.

Time can be learned, but swinging can’t be. It’s an emotion.

I’m not thiinking of rhythms anymore. I’m thinking in terms of certain melodies I hear. I’m trying to play a way now — I’m scuffling a little bit — but I can make plenty of complex rhythms come out by just thinking the way I’m thinking. I’m trying to will my hands to do what I hear in my head at that time.

I don’t know what’s going to come out rhythmically in the end, because I’m thinking about something else completely.

When I hear it back, if it’s being recorded, I don’t know what I play; I can’t even repeat it — ever. Thatto me is where I want to go, and I think it’s important.

http://wp.me/P4vfuP-1
View all posts by scottkfish →
This entry was posted in SKF Blog and tagged Down Beat, Shelly Manne, SKF Blog. Bookmark the permalink.
Vimeo Blog
Confessions Of an Idiot
The Immortal Jukebox