Jim Blackley: ‘Take the Weight Off Yourself. Just Play.’

SKF NOTE: I found out about Jim Blackley’s death from Jonathan McCaslin. Jon asked if I had interviewed the great drum teacher, Mr. Blackley. I had not. Neither did he and I ever meet face-to-face, but we did have a few enjoyable phone conversations about drums and life. When the phone rang, and it was Jim Blackley calling, that was always a good thing.

McCaslin, I think, was also collecting stories about Mr. Blackley from pro drummers for possible use in tribute to Blackley. As McCaslin writes on his blog, Four On The Floor, “Blackley has undoubtedly had an important influence on Jazz drumming in Canada and his methods and books are really worth checking out.”

Here’s an excerpt from my 1983 interview with Bob DiSalle. Bob was telling me about his studies with Peter Magadini and Marty Morrell, then about meeting Jim Blackley.

Bob DiSalle: Then I studied with Jim Blackley. I took about a year off from studying…and went to see Jim at a time I really needed some direction. He was bang on as far as that goes. He was a great teacher. 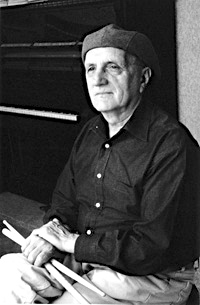 When I was studying with Jim Blackley he was very good for me as far as direction. I remember telling him, “I’m really confused. I’m working really hard, and I don’t think I’m a great player, but I think I’m good enough to work and make more than I am now. It’s like I’m barely getting by, and I just really wish that things would happen.”

My wife and I were talking about starting a family and wanting to buy a house — just the things in your private life that you want to put together.

Jim said, “Just keep working and don’t worry about it. Take the weight off yourself. Just play. Put half your efforts into the music, and with the other half, keep your private life together, and keep yourself together.”

I’d walk away from my lesson feeling like there wasn’t any weight there, and that, sooner or later, things would work out. It just seemed that shortly after I adopted that attitude of relaxing, and letting things go the way they would, things started to work out.

That’s when I started working with Bruce [Cockburn]. I started to get more work around town. The jingle thing started happening. My wife and I got our family started. I bought a house last year, and we’ve got another little addition in the family.

Things — privately and musically — seem to be working towards where I would like them.