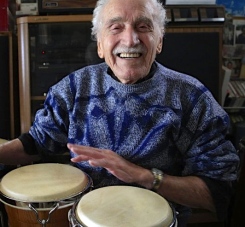 Bongo pioneer Jack Costanzo drums on at 96
The legendary Latin-jazz percussionist, fondly known as “Mr. Bongo,” will perform Friday at Dizzy’s with the Bi-National Mambo Band, under the direction of Bill Caballero
By George Varga | 12:35 p.m. Nov. 14, 2015

What is most notable about this longtime San Diego resident isn’t how vivid his memory is now. Nor [that] he has collaborated with everyone from Nat “King” Cole, Dizzy Gillespie and Elvis Presley to Sam Cooke, Barbra Streisand and Marlon Brando…

“I never smoked, I never did drugs, and that helped me be a healthy person,” said Costanzo.

“Jack is really an inspiration and a hero to all us musicians,” [trumpeter Gilbert] Castellanos said. “He put the bongos on the map and is the bridge between Latin-jazz and jazz. The fact that he’s 96, and still doing it, is unbelievable. He gives 200 percent every time he gets on the bandstand.”

[T]he bongos were virtually unknown in the United States when Costanzo was born in Chicago on Sept. 24, 1919. His first passion was dancing….

When he was about 14, Coztanzo heard a visiting band from Puerto Rico…. For one song, the group’s drummer switched to bongos…. Costanzo was instantly mesmerized.

Since there was nowhere in…the nation to buy bongos.., the enthusiastic teenager made his own. …Costanzo is entirely self-taught on the bongos.

“I listened to a lot of music,” he noted.

Why? What drew him to drumming?

His public profile grew almost instantly, thanks to such key recordings with Kenton as “Bongo Riff,” “The Peanut Vendor” and “Abstraction.”

Costanzo’s career soared even higher in the 1950s and ’60s, when he was being paid double and triple the going Musician’s Union standard rate for recording sessions. He was especially favored by singers, including Ella Fitzgerald, Peggy Lee and Frank Sinatra….

Has Mr. Bongo ever contemplated writing his autobiography?

“I can’t tell you how many people have asked me to, and my answer is always no,” Costanzo said.

“I played with Charlie Parker and Dizzy Gillespie, but my favorite was Bud Powell. How come? Because he complimented me when we were done playing, that’s how come! He shook my hand, and said: ‘Finally, a bongo and conga player who can play jazz’!”