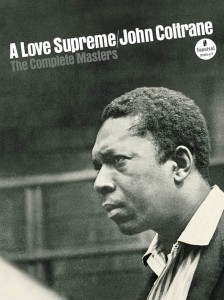 John Coltrane and his classic quartet (Elvin Jones, Jimmy Garrison and McCoy Tyner) went into the legendary Van Gelder Studio in New Jersey and recorded A Love Supreme–the four-part suite that has influenced musicians and reached generations of fans far beyond the jazz world. Far less known is the fact that Coltrane, his classic quartet and two additional musicians–the legendary saxophonist Archie Shepp and second bassist, Dr. Art Davis–returned to the studio the next day to cut the opening part of the suite again. Until now, the complete picture of what happened on those two days, including all takes, overdubs, and even studio chatter, has been unavailable.

That will change on 6 November when Verve will release A Love Supreme: The Complete Masters…. It will include this alternate version, taken from reels from the personal collection of John Coltrane and originally recorded in incredible sonic detail by Rudy Van Gelder, along with revised notes and detailed information on these amazing lost sessions.

…A Love Supreme: The Complete Masters brings together all existing recordings and written outlines for the first time to paint the most comprehensive and accurate picture of the A Love Supreme story. It reveals how Coltrane’s masterpiece came together, from its initial conception as a nine-piece performance–it turns out the original plan was for a nine-piece band, including three Latin percussionists–to how it changed and developed in the studio. …The Complete Masters is the first to feature all six takes of “Acknowledgement,” the opening section of the suite, in their entirety….. The box also presents takes one and two of the track “Acknowledgement” from the sextet sessions in stereo for the first time.

A Love Supreme: The Complete Masters will be available in two formats: a 2-CD set, including the original best-selling album, along with unreleased mono “reference” versions of two tracks, owned by Coltrane himself, and seven unreleased performances from the two sessions. A 32-page booklet features an extensive essay by Ashley Kahn, noted producer, instructor and author of A Love Supreme: The Story of John Coltrane’s Signature Album, rare photographs from the sessions and all of Coltrane’s surviving musical sketches and written elements for the groundbreaking, four-part suite, including the words that would become the poem, “A Love Supreme.”

A 3-CD “Super Deluxe Edition” adds what is currently the only documented live recording of the album, a spirited, impromptu performance from the Festival Mondial du Jazz Antibes in July 1965…. This 3-CD set is presented in a larger format that includes additional information about the live material and a personal introduction by Carlos Santana.