Ramsey Lewis: How I Decided to Record ‘The In Crowd’

SKF NOTE: Thank you, Mike Bourne, for having Ramsey Lewis tell the back story to his Grammy Award winning song, The In Crowd. We never know what chance meetings might lead to. The Ramsey Lewis Trio drummer at this time was Isaac “Red” Holt.

Mike Bourne: How did you decide to record In Crowd? It isn’t exactly an obvious song.

Ramsey Lewis: I was in Washington, D.C. playing at the Bohemian Caverns. We had a record session coming up on the weekend. This was like on Tuesday. We were gonna do like nine tunes, and I think, I had seven down.

So one afternoon, I was having lunch in this place, and this waitress came over and she said, “What are you doing?” I was getting my notes together for the album, what I was gonna play. She said, “Why don’t you record The In Crowd?” The in what? She said, “It’s on the jukebox.” And she played it.

So I went by a record store. I bought the 45, took it back to my hotel, and played it, wrote out the changes, and we had rehearsal that day. And it felt good. But, I said, well, at least it’ll fill the album out — because as far as I was concerned that was not one of the major tunes on the album. 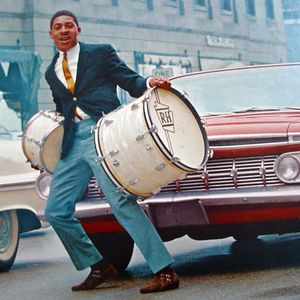 So we played it that night, and the people started reacting to it. So I said, maybe this will do good for the album.

That following night, we recorded it, and the audience participation was out of sight. They were clapping and carrying on and, of course, it’s history now.

MB: It’s such history that you eclipsed Dobie Gray. People remember the song by you, not the original recording.

RL: That’s probably one of the few times in the history of the record industry that an instrumental eclipsed a vocal.