Drum Lessons by Ear, Not Eye

Max Roach spoke to me highly of an African hand drum teacher’s way of teaching. The teacher and his student are sitting in the same room. But they are separated by a sheet or curtain hanging from the ceiling between them. The teacher and student are listening to each other.

These are aural, not visual lessons. There is no music reading. The African hand drum teacher never shows his student how to play something. Instead, the student listens to what the teacher is playing and figures out on his own how to get the same sounds.

Max was responding to my asking him if, when he was a young up-and-coming drummer in New York City, did the preceding generation of drummers, such as Papa Jo Jones and Big Sid Catlett, show him any drum techniques or licks that helped him. 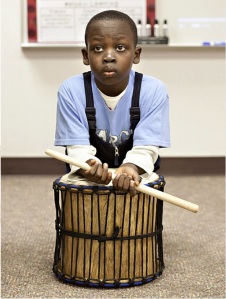 No, said Max. Here’s what happened instead: Max grew up learning from Papa Jo Jones on record or radio. Again, an aural, not visual lesson. And when he heard Papa Jo playing something he, Max, wanted to use, Max would figure out his own way to duplicate it. Sometimes Max would succeed, sometimes he would come close, and sometimes, in the process of trying to copy Papa Jo, Max would discover a new way of playing.

Max said, after he was in New York City, there were times when he would see, say, Papa Jo Jones in a club or theater, playing a song Max had only heard on record or radio, and discover, “Ah, so that’s what he’s playing on that record. That’s how he gets that sound.”

Sometimes I ask myself, “How many more drum method books do we need?” No offense to drum method book authors. It’s just that maybe it’s time we gave equal time to learn to play by ear.

Confessions Of an Idiot
The Immortal Jukebox