Posted on September 9, 2017 by scottkfish 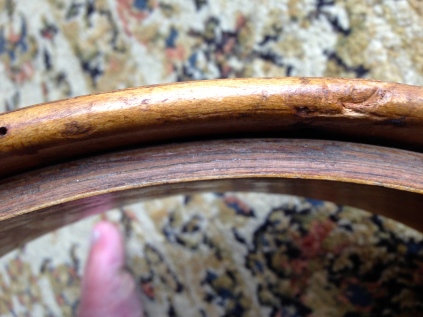 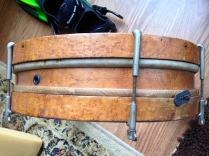 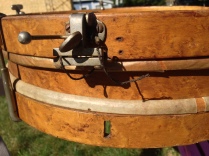 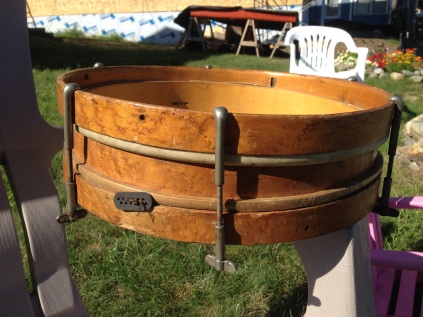 SKF NOTE: Thank you, Lee Vinson, at The Boston Drum Builders, a website devoted to Boston’s early 20th century drum makers, for your help in bringing to light this old snare drum I bought at a yard sale. The snares are stamped “A.A. Young, Lynn, Mass” — which led me to Mr. Vinson’s web site and email address.

The shell is 14.5 inches by 3 inches. With new heads, some cleaning, some lubricating — it will be interesting to hear how this old drun sounds.

Any one know where I can buy 14.5 inch batter and snare heads?

P.S. A.A. Young was born and is buried in in Maine not far from where I’m living.

Thank you for writing. That’s an interesting little drum you have there!

Well the snare wires are certainly A. A. Young’s doings. The rest of the drum may be as well. It does make sense that the drum would still be in that part of the country!

I’ve only come across a very small number of Young’s drums and each of them are quite different. I did see another set of snare wires like that once. It seems Young was very much a DIY kind of guy, willing to piece drums together from whatever he could come up with. Just about every nugget of information I could mine is in the blog post you already found.

I’d be especially curious to know what the snare mechanism looks like. [H]ow many plys [is] the shell? Is there a vent hole with a grommet on the shell?

The thumbrods and claws are pretty nondescript, the same variety used by many makers of the era. The pencil markings are interesting but I don’t know that they can be traced to a specific maker..

The snare mechanism is a design by William McIntosh commonly used by Boston’s Geo. B. Stone & Son. More on that here:

But the shell is very un-Stone like, so I would rule them out as a maker. Again, it’s hard to tell where Young was getting his components from and how much if any he was manufacturing for himself. Regardless, the bird’s eye maple is really striking and despite some extra holes everything looks to be structurally sound which is great.

New calfskin heads would bring this guy back into working condition if that’s the direction you decide to go with it. I’m happy to help if I can be of any further assistance to you!