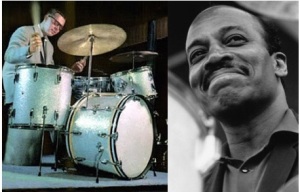 [SKF NOTE: An excerpt from the full transcript of my Modern Drummer interview with Joe Morello. My questions here reflect an interest I had at the time in how the drummers who came in during or soon after BeBop interacted with the great drummers who preceded them. Were there friendships? Mentoring relationships? Or no contact at all?

Joe Morello’s story about playing Papa Jo Jones’s bass drum has always been a favorite. I didn’t expect to hear that Morello – who was 49 years old at the time of this interview – would have a challenge playing ANY drum!]

Joe Morello: One of my favorite drummers was Davey Tough. ‘Cause he could keep a nice rhythm with a band and he kept good time. He didn’t hardly do anything with his left hand. He was just straight ahead on the big cymbal, but he got it cookin’ real good.

Sidney Catlett I used to listen to.

Scott K Fish: Did you ever get to meet those guys?

JM: Sid Catlett I met once. One time in New York.

J.C. Heard was another fine drummer. I don’t know if you’ve ever heard of him.

And then Jo Jones, who is still a good friend of mine. He’s still here. Old man Jo Jones. Jonathan Jones to you. [Morello mimics Jo Jone’s raspy voice.] Boy, that guy taught me a lot, because I played opposite him for about six or seven weeks at the Embers. He was working with Tyree Glenn and Hank Jones. He use to play his bass drum open, see. He had a little 20-inch bass drum, and a snare drum, cymbal, and a hi-hat cymbal. That’s all he had. Oh, and he had one little floor tom. And he’d get up on the drums with brushes and he’d get that bass drum going. [JM taps drum stick on leather sofa cushion, imitating the sound Jo Jones’ would get from this bass drum at the Embers].

SKF: When you say “open,” you mean he had no felt strips at all?

JM: Not at all. [Keeps tapping stick on couch] and he’d get a sound just like that. A good sound.

I’d get up there and I’d play something and it would go BOOM BOOM BOOM BOOM. And I’d say to him, “Jo, how do you do…?” And he wouldn’t talk to me for the first two or three days. He just sort of flugged me off, you see.

But I sat down and I watched that f***in’ bass drum, and I said, “I’m doing something wrong.” ‘Cause he sounds tap tap tap tap, and when I hit it, it goes BOOM BOOM. I couldn’t play it.

The only way you could play it, I found out, was by pressing the beater into the head. He’d play up on his foot like that, but he’s been playing it like that for so long that he can control it, see. Jo was always playing….

JM: Yeah. With his heels up.

And I learned a lot about hi-hats from Jo, because Jo would really get a breathing sound from hi-hats. Just a nice full…. Then we became good friends.